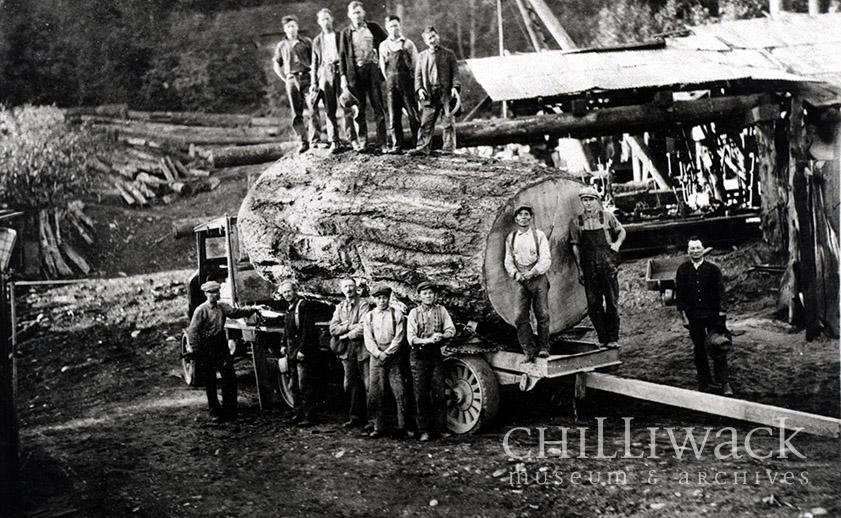 Photography consists of a group portrait of mill workers posing with a huge fir log loaded on an early truck, at the Orion Bowman sawmill at the base of Promontory. Wheels on truck have wooden spokes and hard rubber rims. Three men standing in front appear may be First Nations and/or Chinese.

In 1908 Orion Bowman built his first sawmill on Teskey Road near Upper Promontory, apparently on the farm of Edward Thornton. This first mill suffered a fire in June 1908. An article in the Progress reported the cause of the fire as blowing sparks and cinders from the refuse heap at the rear of the saw dust carrier. The skeleton frame of the building quickly gathered upon the alarm of fire. The Bowman mill was expanded in 1912, and was moved to the foot of Promontory hill, just eat of Promontory Road, two years later. A brief history of the Bowman mills appears in The Fraser Valley Challenge. Both mills were steam powered whilst much of the logging was with horses, wagons and skid roads in the Promontory Hill area. Shortly after the mill was moved to the lower Promontory site, a narrow gauge railway was constructed from the mill, both to the west and to the east. The east section of the rail line extended about four and half miles to Upper Prairie or Big Ditch Road.