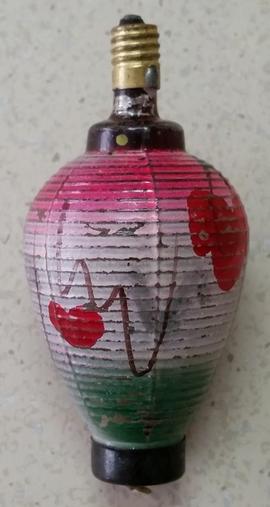 A pink, white and green Chinese lantern-shaped Christmas bulb with raised ribs encircling it. To be used on a string of Christmas lights. At the base is a loop where a tassel may have hung. 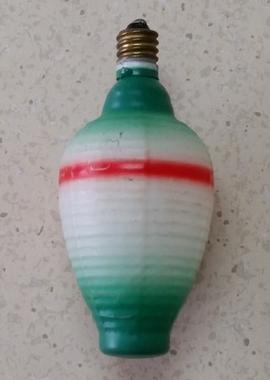 A green, red and white Chinese lantern-shaped Christmas bulb with raised ribs encircling it. To be used on a string of Christmas lights. 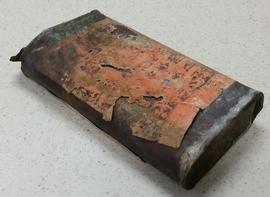 A Chinese ceramic bowl. Inside is green with white edges. The bottom is green and the base has a green border. All colours except the interior and bottom green are applied with a thick paint. The word "China" is carved on the bottom, pe...

A white ceramic spoon with pink and green flowers in the bowl. It is of Chinese origin. 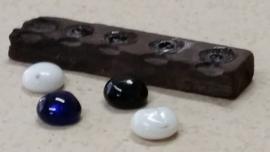 These pieces are from an unknown Oriental game and could be used for many games as markers. (.041) is a small piece of wood with 5 circular indentations. The four glass counters sit on these indentations. Two counters are white, two are blue. 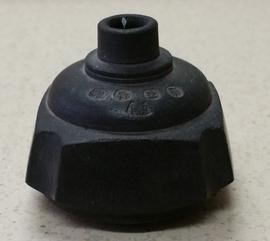 A squat, square-shaped, black pottery container. The base is curved on the bottom. There is a central hole 4mm. in diameter. The body has indentations at each corner. Above this is a circular section tapering toward the neck with five raised Chi... 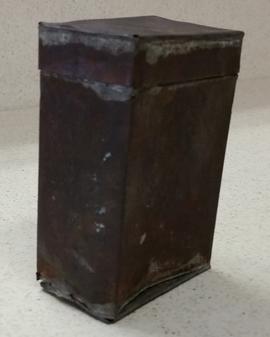 A rectangular tin with a separate lid. It is dark in colour and has been rusted but stabilized. The lid has raised Chinese figures in a shield shape. The source thought it had contained opium. 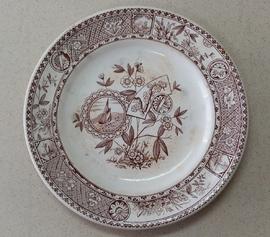 An earthenware plate in beige and brown. A central pattern is in the style of the 1880's in England when Chinois series was in vogue (the copying of Chinese style and subjects on English China). A brown and cream border incorporates geometri... 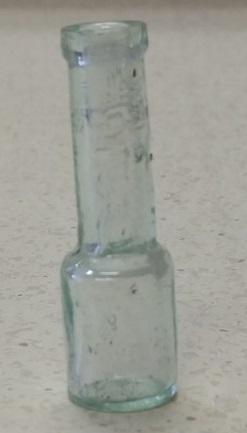 A small, pale green tinted glass bottle with a long neck with a lip. There are Chinese characters embossed on neck and base. 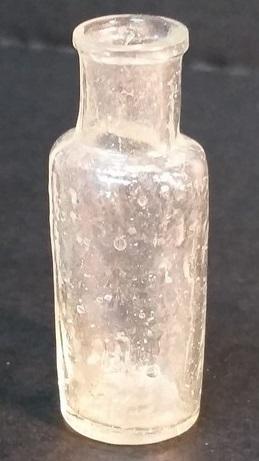 A small, clear, glass, round bottle. A lip edges the neck. Chinese characters are embossed on one side.

Receipt for groceries probably for food delivered to the door. Chinese characters appear at the top with numbers below.

A receipt for groceries probably for food delivered to the door. Chinese characters appear at the top with numbers below. 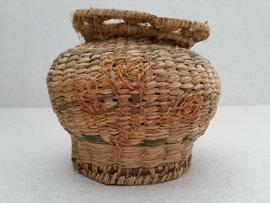 A Chinese ginger jar in brown pottery covered with Salish cedar weaving. Around the base is a ring of wild cherry bark. It is roughly made with bulrush verticals and grass. The base is covered. The rim has a loop design and has grass around the e... 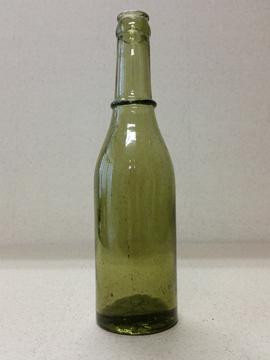 This is a ring-necked, green glass, Chinese whiskey bottle. On the bottom is Chinese writing. There are many bubbles in the glass. 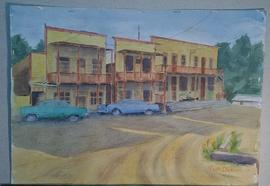 A watercolour and pastel painting of the final section of Duncan's Chinatown, painted just prior to its demolition. The other section across the street had already been torn down but this group of buildings was still in use. Painted in 1969. 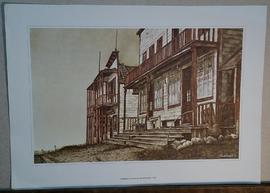 This is a print by Ron Woodall of the remaining buildings in the Duncan Chinatown area in 1970. On the right is Sue Lem Bing's Pekin Restaurant. The building on the left shows the Chinese Free Masons on the right of the lower floor. These bui... 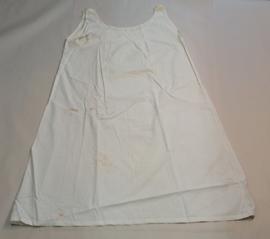 A white cotton chemise, predominantly hand sewn. There may be some machine sewing which would have been done by the Chinese. The family brought many clothes with them from Formosa. The seams are flat fell, the arm and neck holes are decorated wi... 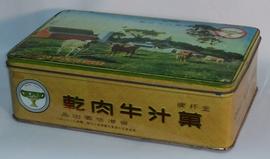 A "Dried Sliced Beef" tin with lid manufactured by the Yee Yuen Co. H.K., 17 Wing Fung St., W. Hong Kong, Tel.727948. On the lid is a picture of a pastoral North American farm scene. There are Chinese characters all over the tin. 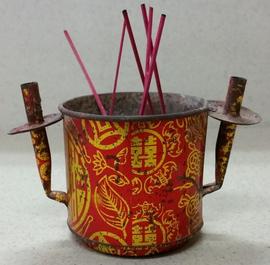 A tin incense burning container with Chinese designs and characters in red and gold. The container holds powder which may be incense, the ashes thereof, or meant to have incense sticks put in it and held upright. There are sticks jutting upright ... 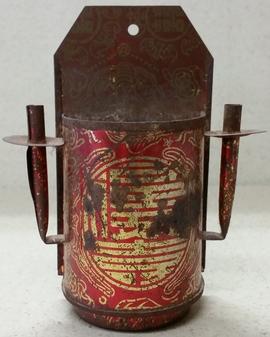 A tin incense burning container with Chinese designs and characters in red and gold. The container holds powder which may be incense, the ashes thereof, or meant to have incense sticks put in it and held upright. The back of this container has a ... 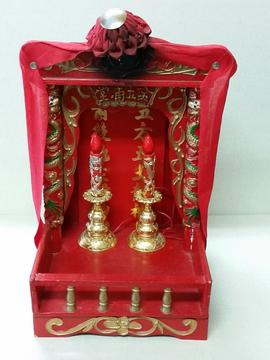 A small portable wooden altar. Two ornate, plastic, gold-coloured electric candles come with it. A wire reaches out the back to plug in the candles. 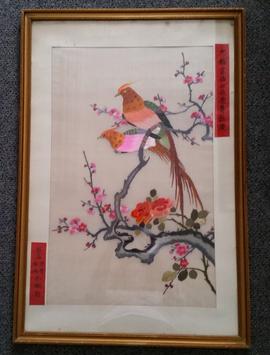 Embroidered picture of two birds on a branch. The picture is matted. On the lower left and upper right side of the matting are strips of red paper with Chinese characters on them. The upper right characters indicate that the picture was given to ... 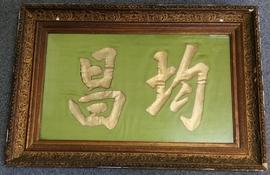 A picture of two Chinese characters painted in gold on a piece of green silk. It is framed behind glass. There is raised scroll work and vegetative designs on the frame. This is an indoor sign for the Quon Chong Grocery in Duncan's Chinatown...

A wooden sign with three Chinese characters on it. The sign is painted on a single board which has bowed or warped. The symbols mean Quon Chong Grocery.