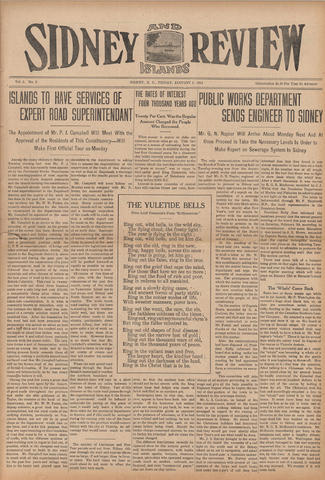 "The 'Whale' Came Back
Some two or three weeks ago while out in his launch, Mr. F. Warrington discovered a huge dead black fish, or, as they are sometimes called, sulphur belly, floating in the water just outside the boom of the Canadian Southern Lumber Company. He attached a rope to the corpse and drew it up on the beach at the top of Second street. Of course a great many visitors wended their way to the beach to have a look at Mr. Warington's 'whale.' There it lay for several days while the owner tried to dispose of the carcas to Victoria dealers.
He was not successful and as a result the 'whale' was becoming a whale of a load on his hands, owing to the gentle odor it was beginning to throw off. How to dispose of it -- that was the question. After talking to a Chinaman who lives on an island close by for several hours he finally convinced the Celestial that there was several hundred dollars to be make out of the carcas by boiling it down for oil. The Chinaman took the bait and accordingly attached a line to the 'whale' and towed it to his island home. It must have been too strong even for him so he cut it loose and allowed it to drift out to sea again. Evidently the tide was setting in the right direction at the time as once more the huge dead fish was washed up on the beach close to Sidney and in front of Mr. R.G.R. McKenzie's residence. Mr. McKenzie immediately got busy on the telephone and, after a lengthy debate, finally convinced Mr. Warrington that the whale belonged to him and urgently requested him to move it at once, as its presence in that vicinity could be almost felt, by this time. A lasso was accordingly thrown over the huge head and once more it tow of a launch it wended its way seaward. We wonder if it will come back."