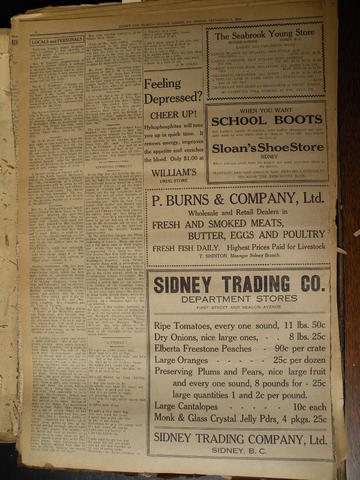 "On Tuesday night, some, time shortly after midnight, two of our well known citizens were rudely aroused from their slumbers by a noise in their back yard. The lady of the house went to investigate (and by this we do not wish to cast any reflection upon the bravery of the man) and discovered two men in the act of stealing vegetables from the garden. She immediately gave the alarm and seizing the first weapon that came to her hand, which happened to be a hammer, she gave pursuit. The two thieves on finding themselves discovered, made a hasty exit through the gate and down the street, followed closely by a flying figure in white and what they apparently took to be a ghost. So strenuous indeed was the pursuit that the Chinamen, as they proved to be, began casting off many of the things that encumbered them in their flight. One threw away a bag of onions which he had secured from a garden next door, and the other, like a German soldier in retreat, discarded his boots, all of which were picked up later by the pursuer and her husband, who brought up the rear guard. The trophies of the battle are now on exhibit at a certain store in town while the proprietor spends a good deal of his time keenly eyeing every Chinaman that passes hoping against hope that he may be able to discover one among the lot that will fit the boots."