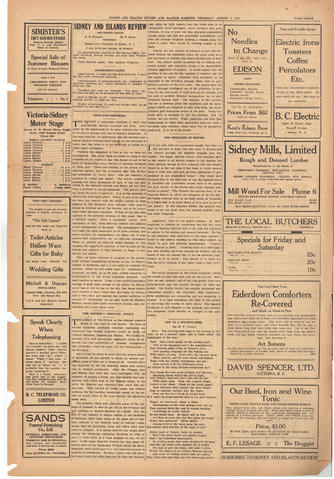 "The Review's Oriental Policy
The attitude of The Review on the Oriental question should by this time be well known. We have on several occasions published editorials expressing our conviction that British Columbia would be better off without Japanese, Chinese and Hindus. We believe industrial, civic and educational conditions would be improved, and that prohibition of Oriental immigration and ownership would do much for the development of the Province.
But it must be borne in mind that the present beads of industries are not entirely to blame for present conditions, some of them not to blame at all. Oriental labor was imported by the big interests, whose only motive was to cheapen production. After the Chinese, Japs and Hindus were here they were confronted with the necessity of making a living, and they entered into competition with white men in the logging camps, in the mills, the fisheries and wherever they could find employment. They worked for lower wages, and without realizing the far-reaching deleterious results of the advent of Asiatic labor to the local market, the industries hired them.
The problem which now confronts many of the captains of industry is how to get rid of the Oriental and still continue to operate industry at a profit. For one mill or one cannery to employ whites to the exclusion of Orientals while other plants in the same line of business continue to use Oriental labor at reduced wages, means that the institution using only white labor must cease to complete. It is patent that for any single plant among the industries employing Orientals to shift at once to white labor at a wage increase of say 40 per cent, would mean financial disaster for that plant. Unless in place of the discharged Oriental hands the newly employed white hands gave it a very material increase in quantity of production. We hear a great deal said about how much more the white man can do than the Oriental, and while we fully believe that the white man is incomparably more intelligent, more energetic and more efficient, we beg to point out that tabulated comparative results along this line are practically non-existent, and that the average employer making a change from Oriental to white labor would be working largely in the dark.
Clearly, for one captain of industry to oust the Oriental without his associates doing the same could have but the result of putting that man's industry out of business. The Asiatic cannot be gotten rid of without concerted action; and concerted action is an impossibility without unamimity of opinion. It would appear that the problem is not one for the captains of industry but for the people to solve. Orientals were permitted to be imported to the Province because there were no prohibitive statutes on the civil code. The people have the power, through intelligent use of the plebiscite, to provide for the enactment of such laws as are needed, and not only to prohibit Oriental immigration, but to eject Orientals already here. The solution of the problem lies not in howling about the employers and the newspapers which are supposed to side with them, but in intelligent and unanimous action at the polls. When Oriental labor is excluded by law the problem will be solved, but not before. When conditions are such that employment of white lobor exclusively does not work a hardship upon industry, white labor will be exclusively employed. It is up to the people."