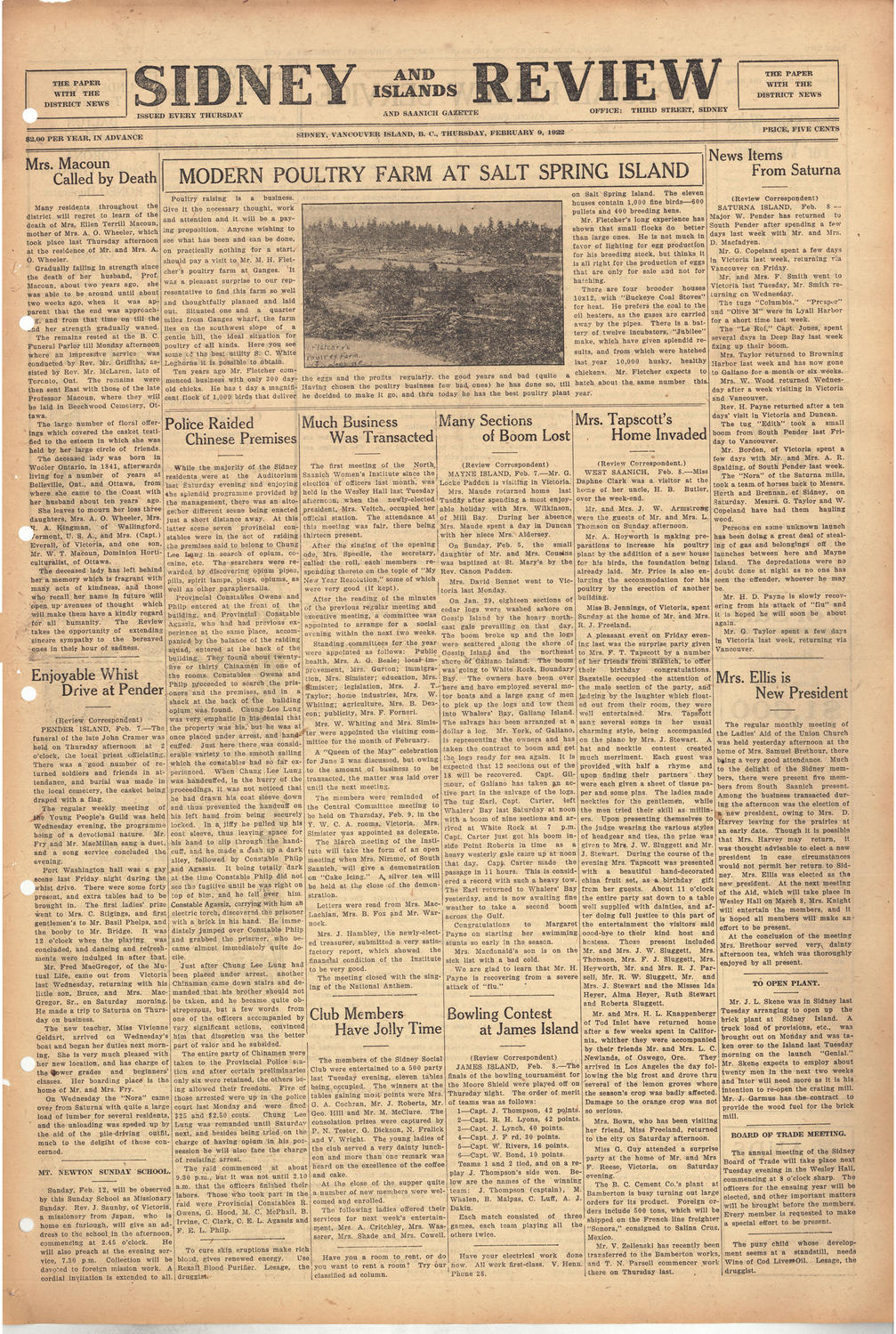 “Police Raided Chinese Premises – While the majority of the Sidney residents were at the Auditorium last Saturday evening and enjoying the splendid programme provided by the management, there was an altogether different scene being enacted just a short distance away. At this latter scene seven provincial constables were in the act of raiding the premises said to belong to Chung Lee Lung in search of opium, cocaine, etc. The searchers were rewarded by discovering opium pipes, pills, spirit lamps, plugs, opiums, as well as other paraphernalia.
Provincial Constables Owens and Philp entered at the front of the building, and Provincial Constable Agassiz, who had had previous experience at the same place, accompanied by the balance of the raiding squad, entered at the back of the building. They found about twenty-five or thirty Chinamen in one of the rooms. Constables Owens and Philp proceeded to search the prisoners and the premises, and in a shack at the back of the building opium was found. Chung Lee Lung was very emphatic in his denial that the property was his, but he was at once placed under arrest, and handcuffed. Just here there was considerable variety to the smooth sailing which the constables had so far experienced. When Chung Lee Lung was handcuffed, in the hurry of the proceedings, it was not noticed that he had drawn his coat sleeve down and thus prevented the handcuff on his left hand from being securely locked. In a jiffy he pulled up his coat sleeve, thus leaving space for his hand to slip through the handcuff, and he made a dash up a dark alley, followed by Constable Philp and Agassiz. It being totally dark at the time Constable Philp did not see the fugitive until he was right on top of him, and he fell over him. Constable Agassiz, carrying with him an electric torch, discovered the prisoner with a brick in his hand. He immediately jumped over Constable Philp and grabbed the prisoner, who became almost immediately quite docile.
Just after Chung Lee Lung had been placed under arrest, another Chinaman came down stairs and demanded that his brother should not be taken, and he became quite obstreperous, but a few words from one of the officers accompanied by very significant actions, convinced him that discretion was the better part of valor and he subsided.
The entire party of Chinamen were taken to the Provincial Police station and after certain preliminaries only six were retained, the others being allowed their freedom. Five of those arrested were up in the police court last Monday and were fined $25 and $2.50 costs. Chung Lee Lung was remanded until Saturday next, and besides being tried on the charge of having opium in his possession he will also face the charge of resisting arrest.
The raid commenced at about 9.30 p.m., but it was not until 2.10 a.m. that the officers finished their labors. Those who took part in the raid were Provincial Constables R. Owens, G. Hood, M.C. McPhail, B. Irvine, C. Clark, C. E. L. Agassiz and F. E. L. Philp.”